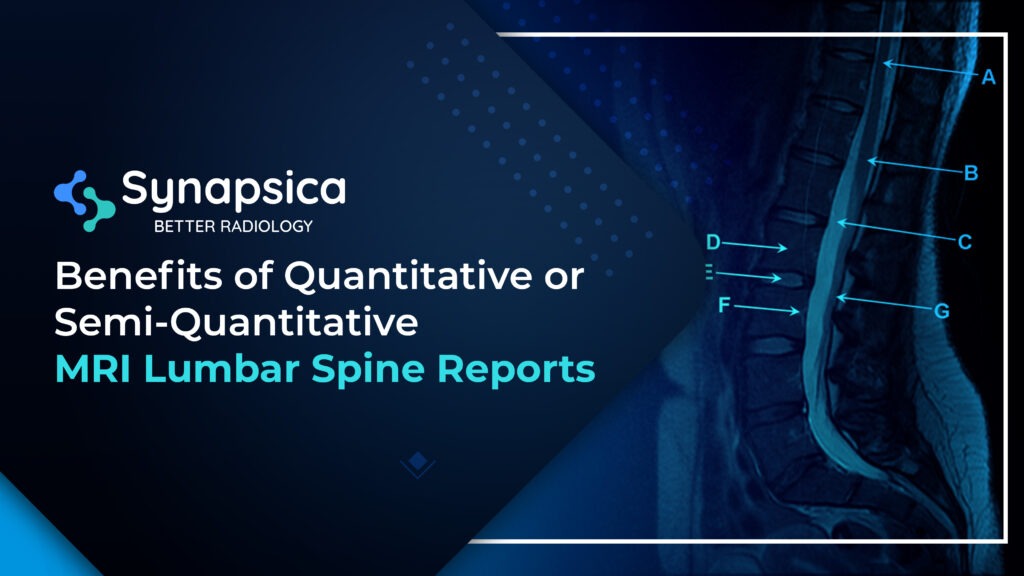 Radiology reports are the most important means of communication between a clinician and radiologist. It is critical in the case of lumbar spine MRI, as even a minute detail in the report can change the course of treatment, especially in the event of surgery.

But, is the information/message getting communicated properly?

Nearly 20 to 30 % of a healthcare institution’s revenue is spent on radiology reporting. Yet, there is an increased percentage of diagnostic variability and error rate in traditional radiology reports, especially in spine MRI reports.

Lack of quantification leads to diagnostic variability – the mother of all problems in radiology.

According to a recent study published in The Spine Journal, diagnostic variability and error rates are high in MRI examinations of the lumbar spine. The study was carried out to compare the interpretive findings of a patient’s MRI from 10 different diagnostic centers. The patient was a woman of age 63 with a history of low back pain and right L5 radicular symptoms.

Results of the study noted 49 unique findings indicating the presence of a distinct pathology at a particular motion segment. Also, there was not a single interpretive finding that was reported by all 10 centers and the diagnostic error rate was up to 43.6%.

As rightly said by Mark L. Graber, founder of the Society to Improve Diagnosis in Medicine,

Diagnosis is extremely hard as there are 10,000 diseases whereas only 200 to 300 symptoms.

In the case of spine problem, it is even more challenging to diagnose the root cause of a problem as the spine is not a single bone, but a framework of 33 individual bones of different sizes.

Diagnosing the cause of back pain is tricky as numerous symptoms mimic a popular condition but in reality, the symptoms may be the indication of something else. Also, low back pain can be the cause of a combination of problems and not just a single problem.

Every year, nearly 31 million Americans visit a physician regarding low back pain. However, chronic pain is misdiagnosed 40 to 80% of the time as per the study conducted by John Hopkins University.

Most times, misdiagnosis is the result of incorrect interpretations. Further, radiology reports are lengthy and unstructured, often leading to incorrect treatment plans or surgeries.

Given the increasing shortage of radiology professionals, radiologists are pushed to study an image within 3 to 4 seconds. And in the event of quickly studying the images, what seems mild to one radiologist, might seem moderate to another radiologist, ultimately leading to interobserver disagreement. All of this affects the quality of patient care delivered.

Consider the same example as before. The measurements of the herniated disc help both physicians and surgeons. While physicians get a clear picture of the severity of the condition, a surgeon can decide the best type of surgery for the condition when required.

For a disc herniation of 2 mm and 3mm, endoscopic microdiscectomy is enough to remove the pressure off the nerve root. In the absence of quantitative reports, physicians might end up doing an open surgery for a herniated disc of 2mm or 3mm, which is totally unnecessary.

2. Helps in understanding the progression of a disease

As explained above, routine radiology reports hold information about a disease and its severity. Typically, a physician will order a couple of radiology exams in regular intervals to understand the progression of the disease. However, with the routine reports, the physician will not be able to estimate the pace of progression.

On the other hand, quantitative reports provide absolute numbers that help in better understanding the progression of a disease.

How can AI help?

1. Ready and available at any hour of the day

Undoubtedly, finding answers from images is interesting. But it might also be stressful when a person has to do it for long hours in dark rooms. The attention span and the observation of radiologists decreases by the end of the day. Not to mention the increasing number of medical imaging procedures that have increased the workload and burnout of radiologists.

According to a recent survey, 55% of radiology practice leaders reported burnout as a serious problem. As a result, more extensive and complete observation of images as well as creating reports has become a tedious task.

Unlike humans, machines neither grow tired of monotonous work nor experience burnout.

Matter of fact, many health tech firms are going a step further and using technologies like NLP, another subset of AI, to transcribe AI findings into a concise and comprehensible report.

One such tech innovation is Spindle – an AI reporting assistant for spine MRIs.

Contrary to the common belief, AI-powered applications are hard to integrate, Spindle can be easily integrated with any PACS or RIS in less than 15 minutes.

Top 4 Use Cases of AI in Spine Injury Cases 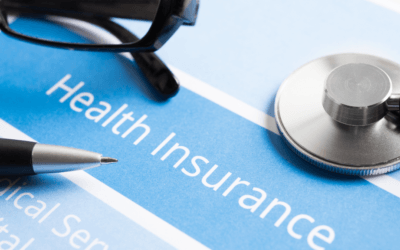 AI Becoming an Invaluable Weapon in the Combat Against Health Insurance Fraud? 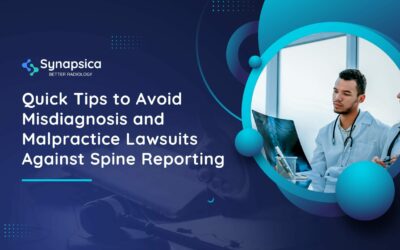 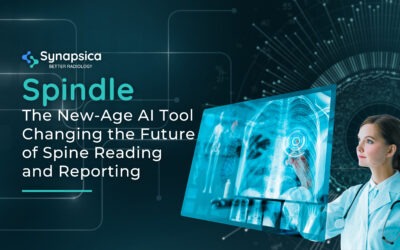 Spindle: The New-Age AI Tool Changing the Future of Spine Reading and Reporting 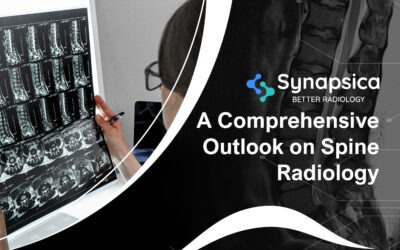 A Comprehensive Outlook on Spine Radiology

Let's get in touch

Give us a call or fill in the form below and we will contact you. We endeavor to answer all inquiries within 24 hours on business days.
+91-80471-91921
info@synapsica.com

How can we get in Touch?